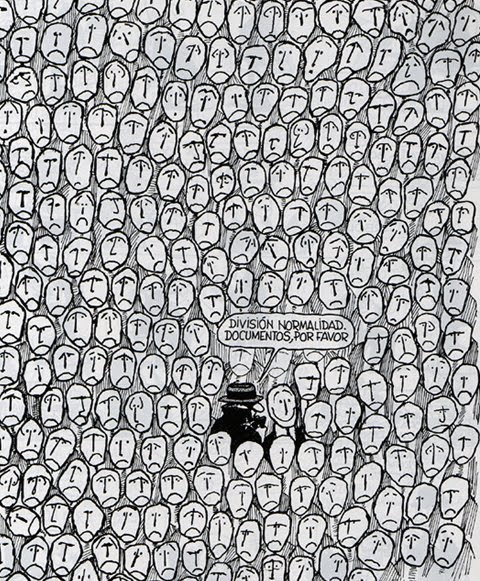 By James Neilson
For the Herald

If CFK & Co. want to “coordinate national thought”, they should finance it themselves instead of taxpayers
Professor Ricardo Forster, a man whose views mostly coincide with Cristina’s, should give both her and his immediate boss, culture minister Teresa Parodi, a class in semantics. Innocent-looking words often have connotations you may not find in most dictionaries. By naming him “Secretary of Coordination of Strategic Planning for National Thought,” a job description that sounds as bizarre in Spanish as it does in English, they only exposed him to ridicule. Though Forster himself swears he is a tolerant bloke who respects all schools of thought, even the odious liberal ones that are loathed by loyal Kirchnerites, no sooner had the appointment been made public than he found himself the butt of countless nasty jokes and some even nastier comparisons with the late Joseph Goebbels.

For a devoted student of the Marxist mystic and aesthete Walter Benjamin, that must have been most unpleasant.

The chauvinistic notion that some thoughts are Argentine and should be allowed in, while others are foreign and therefore deserve to be sent straight back to wherever they came from is hard to square with democratic pluralism. That does not worry Cristina, who on occasion has warned us about the dangers lying in wait for people who are foolish enough to let alien ideas contaminate the pristine local variety.

She is far from being the only person to think this way. For well over a century, bands of nativists, populists, Roman Catholics and, of course, proudly patriotic military men who worship the “national essence”, have been doing their best to defend the country’s mental frontiers against the hordes of invisible invaders they imagine are out to colonize Argentine minds.

For a time, the worst foreign ideas were assumed to be the ones hawked by revolutionary French rationalists or their rivals, the British empiricists. Then platoons of materialistic Yankee advocates of big business tried to make headway. These purveyors of unpatriotic thoughts about the merits of free enterprise competed for a market share with godless communists.

For eleven years now, Cristina and her supporters, among them Forster, have been doing their utmost to keep at bay devotees of “neoliberalism”. Though hardly anyone anywhere admits to being a “neoliberal”, it would appear that cult members have contrived to infiltrate most of the world’s governments and make them to do disgusting things like spending less. According to Axel Kicillof, the wretches are currently trying to force Cristina’s government to devalue the peso again.

Some supporters of the military dictatorship devoted a considerable amount of energy to driving out what their Japanese counterparts almost half a century earlier had called “dangerous thoughts”. As well as frightening people into hiding books that looked suspiciously subversive, the regime banned Aunt Julia and the Scriptwriter, a humorous novel by Mario Vargas Llosa in which a character said unkind things about Argentina. But by and large the men in uniform were inhibited by the lip service they paid to democratic values and most limited themselves to subjecting youngsters to a rather old-fashioned but on the whole harmless civics course. They never managed to brainwash their compatriots as did the authoritarian Peronist governments that ruled the country after the Second World War. Though Cristina would dearly like to emulate her Peronist forerunners, her chances of getting away with it are now close to zero.

Things would be far easier for the Kirchnerites if ideas carried passports. They could then discriminate in favour of the ones coming from friendly powers like Venezuela and Iran, and against those exported by British pirates or Yankee imperialists.

Unfortunately for them, there is no way they can decide whether an idea is worth incorporating into the national stockpile or deserves to be put under lock and key to await deportation.

To make matters worse, all the nationalistic ideas fervent Kirchnerites like most come from abroad. Until fairly recently, people were far more interested in being theologically correct than in attributing ethnic characteristics to certain points of view.

That habit arose a couple of centuries ago when German thinkers, fed up with the universalistic pretentions of their overbearing French neighbours, decided their way of thinking was better because it was theirs. That settled, anti-Semites started distinguishing between “German physics”, a solid down-to-earth discipline, and “Jewish physics”, an anarchic affair that made no sense to anyone apart from a handful of theorists who, in many cases, just happened to be Jews.

Throughout the world there are thousands of think tanks funded by businessmen, academic bodies and political parties who want to promote their ideas.

Many do an admirable job. Should some well-heeled Argentines be willing to support Professor Forster’s version of the “thinkery” Aristophanes attributed, most unfairly, to Socrates in his comedy, The Clouds, nobody would have cause to complain, but if Cristina and company want to “coordinate strategically national thought”, whatever that may be, and then get down to telling us about it, they themselves should finance the undertaking instead of forcing the hapless taxpayer to foot the bill.
Posted by Sine Metu , a las 4:57 p. m.

Me recordó al Mikado:
"As some day it may happen that a victim must be found,
I've got a little list--I've got a little list
Of society offenders who might well be underground,
And who never would be missed--who never would be missed!
There's the pestilential nuisances who write for autographs--
All people who have flabby hands and irritating laughs--
All children who are up in dates, and floor you with 'em flat--
All persons who in shaking hands, shake hands with you like _that_--
And all third persons who on spoiling tete-a-tetes insist--
They'd none of 'em be missed--they'd none of 'em be missed!"